The Basilica Cattedrale Patriarcale di San Marco, widely known as Basilica di San Marco is the cathedral of the Roman Catholic Archdiocese in Venice in north Italy. It is the most well-known church in the city and is one of the most recognized specimens of Italy's Byzantine architecture. This is where the Relics of the Evangelist Marco has been kept since the 9th century.

It is situated at the east side of the Piazza San Marco, next to the Dodge’s Palace with which it is linked to. Originally it was the Doge’s Palace and it became the Cathedral of the city in 1807 when the seat of the Patriarch of Venice was transferred there. The Cathedral has also been known by the name Chiesa d’Oro meaning golden church, due to its rich design and gold mosaics making it a symbol of Venetian wealth and power.

A previous temple in honour of Evangelist Marco began being built in 830 in order to house his remains which were transferred from Alexandria in 829. The construction of the temple that exists today began in 1063, on the previous church of the 9th century, which was destroyed during the riots of 916. The construction was completed in 1093, which is when the interior decoration began. Many byzantine artist artists took part, and many materials were brought from the Byzantium especially columns.

The cathedral has the shape of a Greek cross inscribed in a rectangle that is covered by five main domes, one in the centre of the cross and four on the corners that looks like the structure of the Holy Apostles Church in Constantinople. It is considered to be one of the most beautiful specimens of byzantine architecture. It has three arches on the façade, one large central one and two smaller ones on the side. The right hand side is adorned with a peristyle. The dome is the main architectural element of the roof that is actually made up of a total of fourteen different domes with a variable size between them according to their location with the smaller ones assisting in the relief of the larger loads.

The domed roof is supported by a series of solid pillars in combination with a thick network of columns that support the upper part of the basilica. There are five decorated gates on the main facade, similar to those of the roman architecture, with columns that support semicircles, or in the case of side gates a pointed arch. The drums that are located at the gates have decorations from different periods and styles, revealing their byzantine origins from the gold foil with which they are covered. The fist level is supported by a railing, while another behind has five arches with the same decoration, a central arch larger than the ones on the side in which there is a glass opening for the lighting of the basilica interior as it occurred in roman and gothic architecture.

The fist interior decoration of the San Marco Basilica was a work of art by specialists in byzantine mosaics, however the mosaics were lost during the fire that occurred in 1106. With the exception of a few piece that were retrieved after the fire, today’s mosaics are dated to the 12th century. The large number of marble columns, the variety of the mosaics from all the periods (12-15th century), the mixture of rhythms and the rich decoration, present a peculiar total. The portico of the cathedral has four copper horses that Constantine the Great removed from the Arch of Trajan in Rome, and transferred them to Constantinople. After the fall of the city by the Franks, they were transferred to Venice and placed at San Marco along with the Portrait of the Four Tetrarchs. 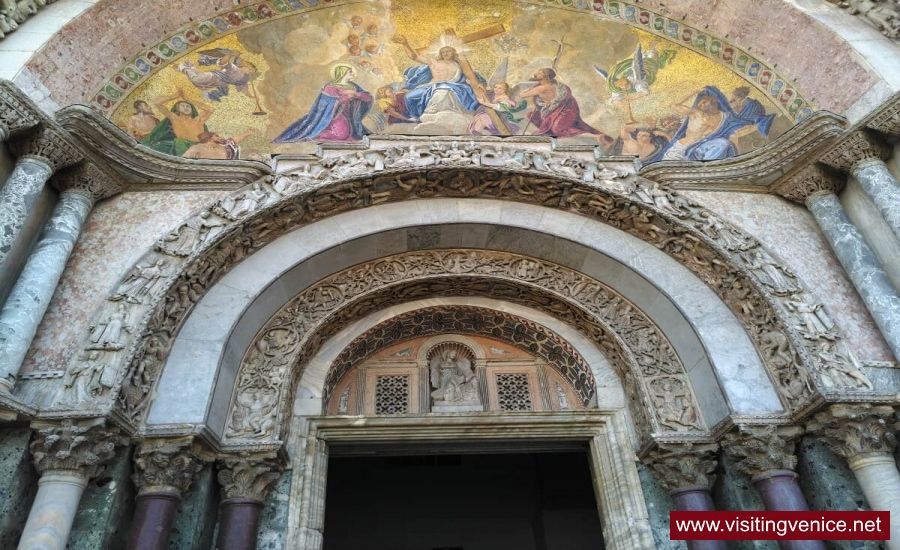 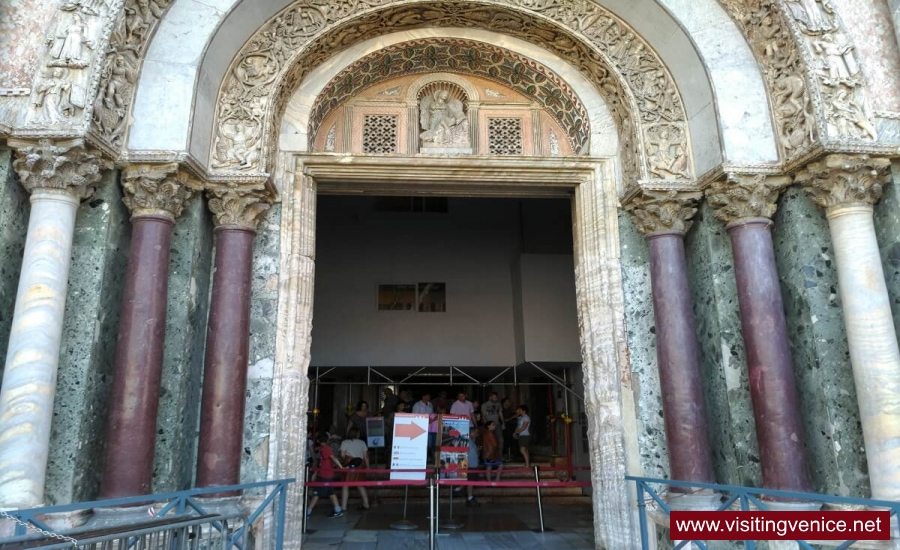 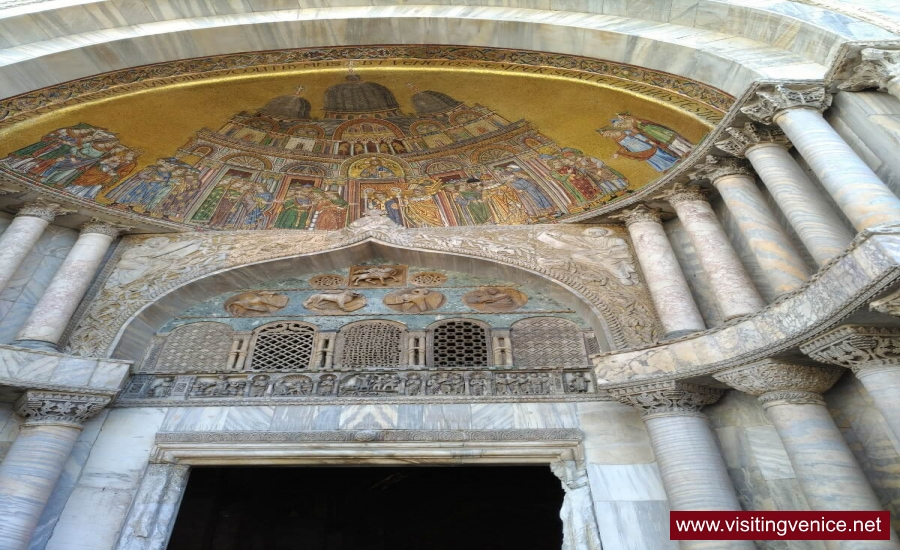 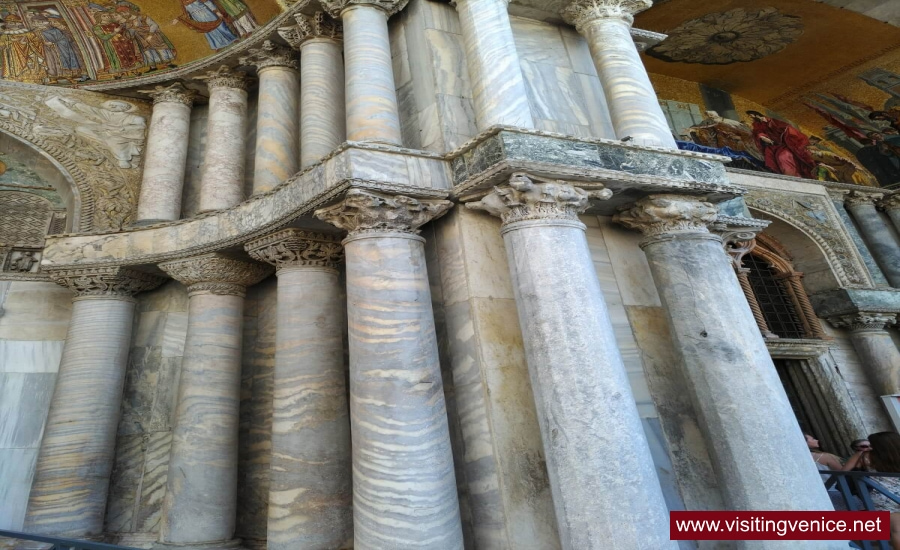 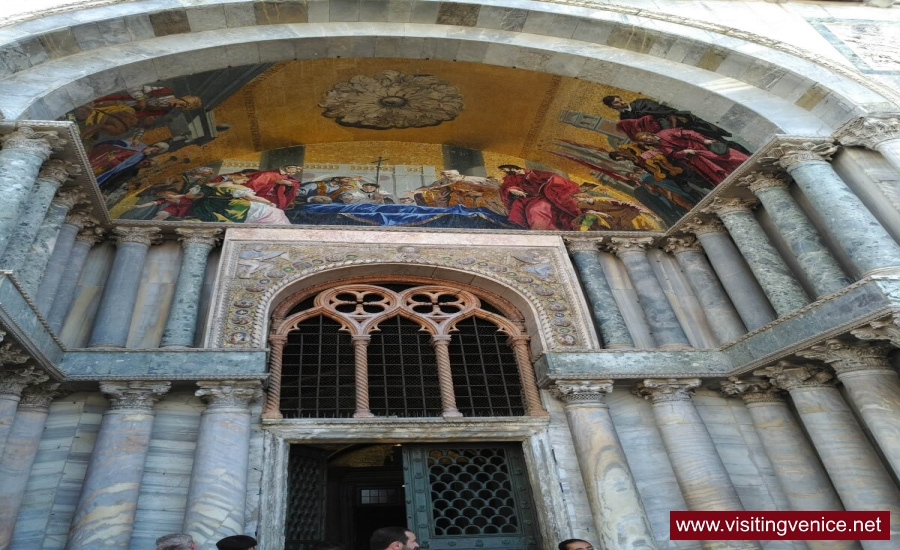 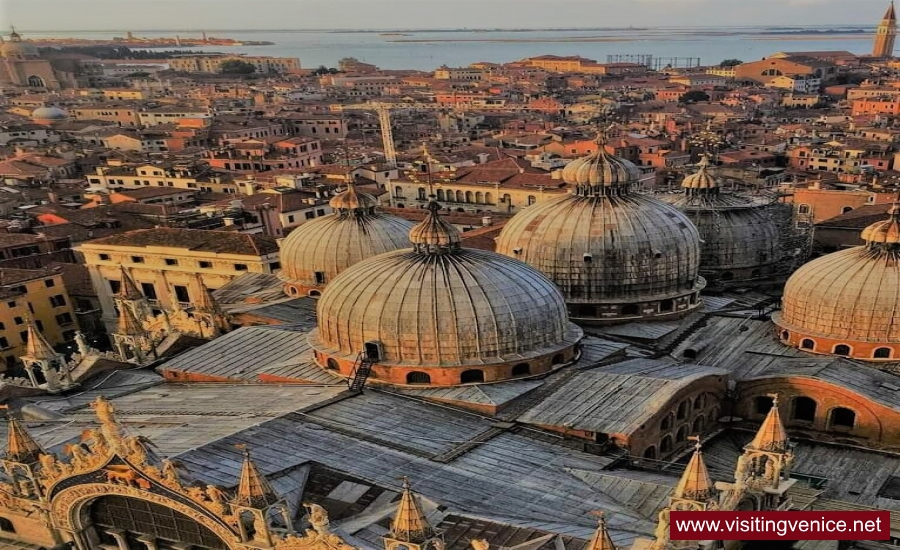 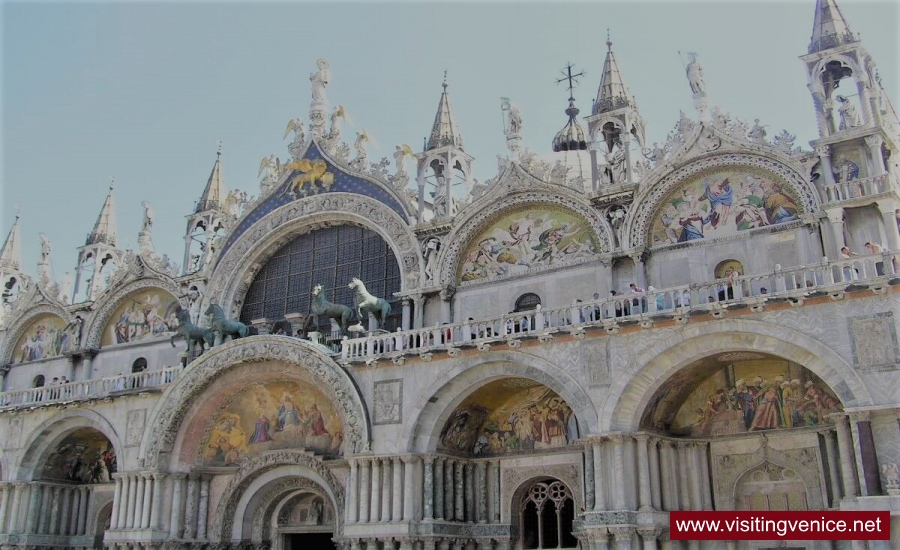