The Venetian Republic Flag is considered to be the most beautiful flag that was created. It is the flag that waved in the galleon of San Domenic Contarini, the Doge of Venice from 1659-1675. The colours of the flag are red and gold which were the colours of the navy, heritage from the Roman and then Byzantine Empire. The deep red is a characteristic of the Venetian navy flags as well as the military uniform. However it must be noted that the official colours of Venice are blue and gold.

The Saint Mark lion on the particular flag is turned to the right towards the lance or the ship's mast and the snout looks towards the observer. Most of the Saint Mark lions are turned towards the left, therefore any that look towards the right are considered to be a rare specimen. Its tail shows a characteristic S adding magnificence to the lion, highlighting the holiness of the emblem and the personification of the Democracy. In reality, the lion symbolises Evangelist Mark and shows that the true leader is Saint Mark, while the Doge is only the human leader. This confirms the classic Christian perception that royalty or every legal authority comes from the will and with the blessings of God.aint Mark is symbolised with a lion because the Gospel begins with John the Baptist’s survival in the desert where lions live, as well as the fact that his preaching was like a lion’s roar.

The flag is considered to be of peacetime, as the lion is not represented as a crusader which is typically shown during periods of war. This view is also amplified by the jaws of the lion which are slightly closed and not threatening. Under the left leg of the lion, there is an open book which is possibly the Gospel of Saint Marl. The lion’s wings also symbolise the wings of the Angel. The lions stands with his two front legs on land and the other two in the sea, symbolising the double domination (Stato da Tera και Stato da Mar). The land that one leg stands on is the area around Veneto while the other stands on a mountain with a castle on the peak, symbolizing Northeast Italy. The sea waving like a gentle breeze symbolizes the peaceful Venetian domination of the Adriatic Sea until the Eastern Mediterranean. On the Contarini flag, the lion’s back legs do not sink but stand over the water and the stylized islands with castles and waving flags underline the naval power of Venice and its overseas territories.

The perimeter of the flag around the lion is decorated with a baroque pattern. The coat of arms of Contarini appears four times, with the Doge hat at the top surrounded by the Turkish captives. The winged Cupids, vines, armours, canons and others. Lastly, from the top towards the bottom there is an illustration of the Archangel Gabriel and the Virgin Mary during the Evangelism with the Holy Spirit between them , Saint Dominique (protector of the Doge) further down , and Saint Francisco (protector of Venice) , Saint Antonio of Padua (protector of Venice) and Saint Mark and the Virgin Mary amongst them.

The left part of the flag is made up of the 6 tails that waved separately, symbolising the 6 districts of the city. On all of the tails apart from the coat of arms of Contarini with the tridents, there are three lions in the position of a crab. This position is which the crabs appear during the season in which they change their shell with their thorax being softer and with their claws open. They symbolise the town that is lifted from the waters, in other words Venice and its lagoon. 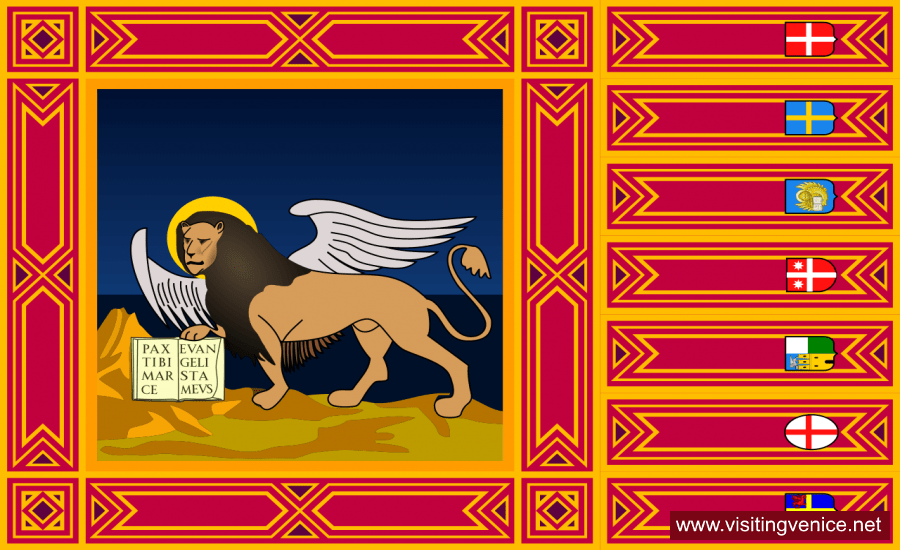 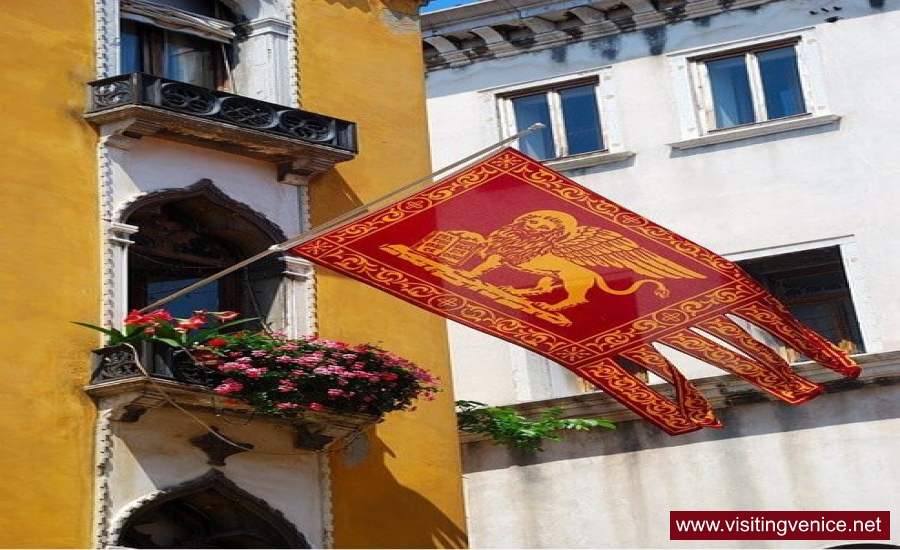 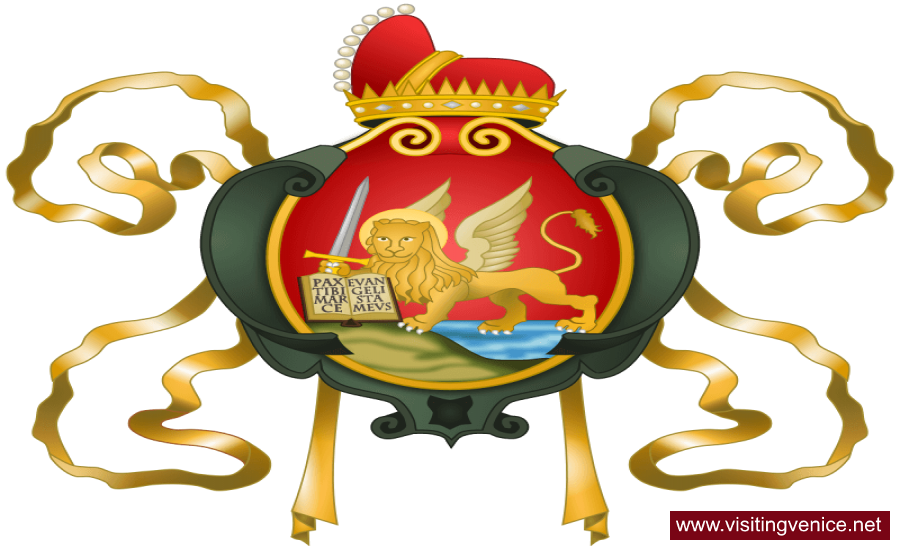 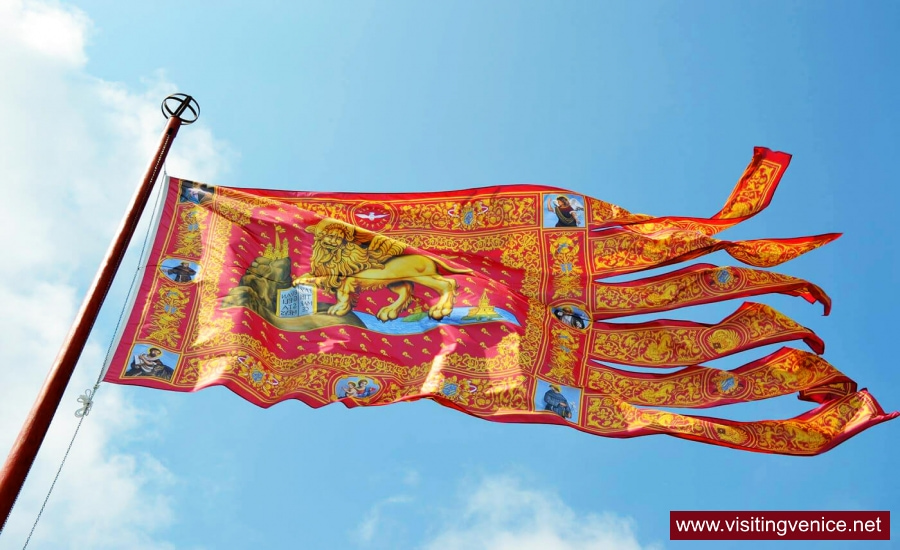 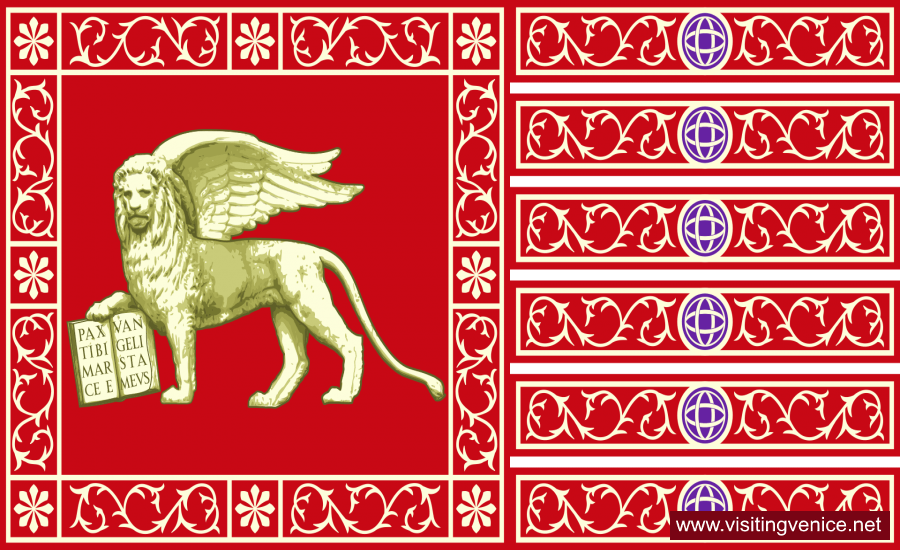 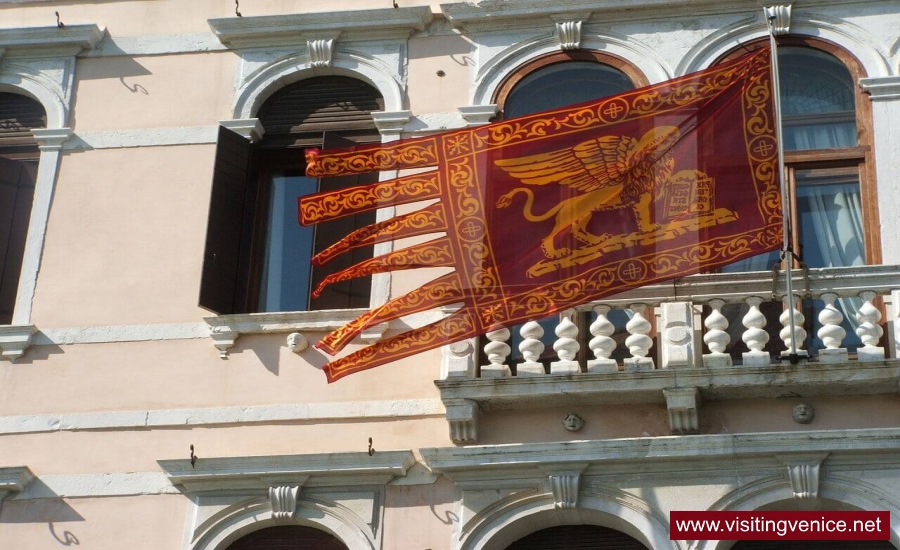 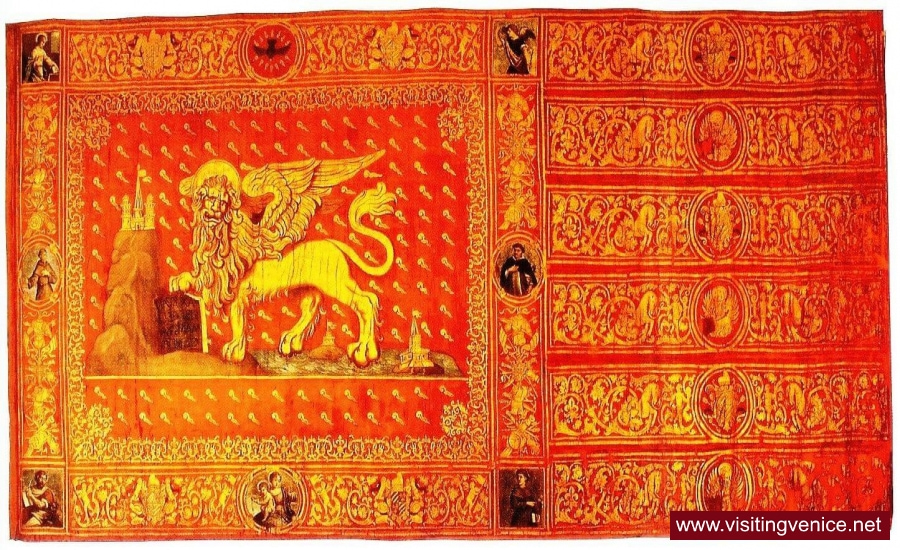